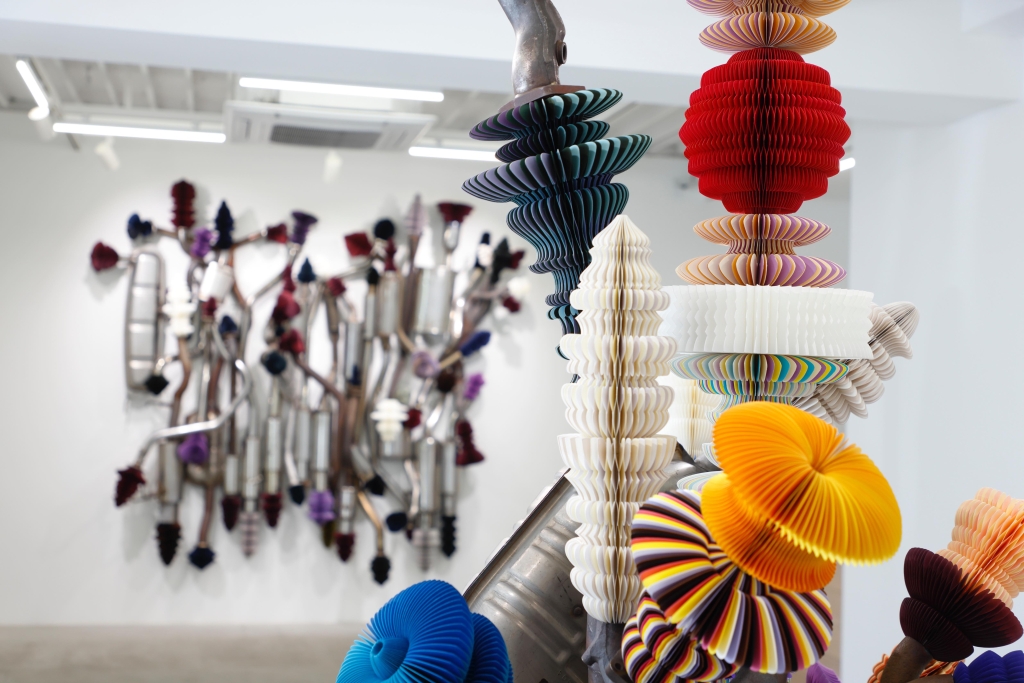 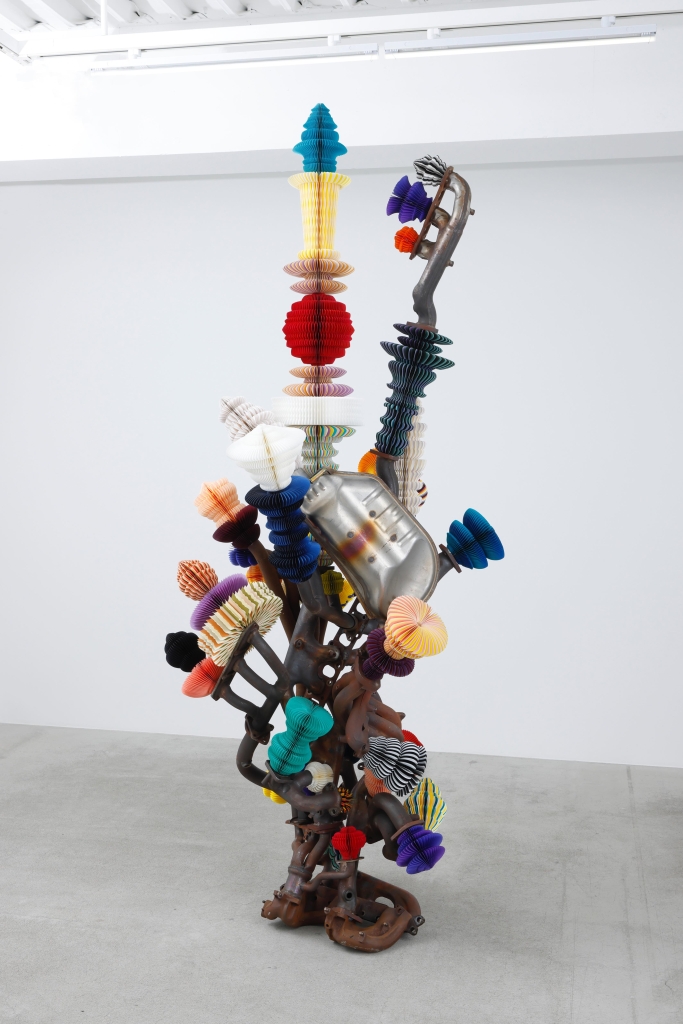 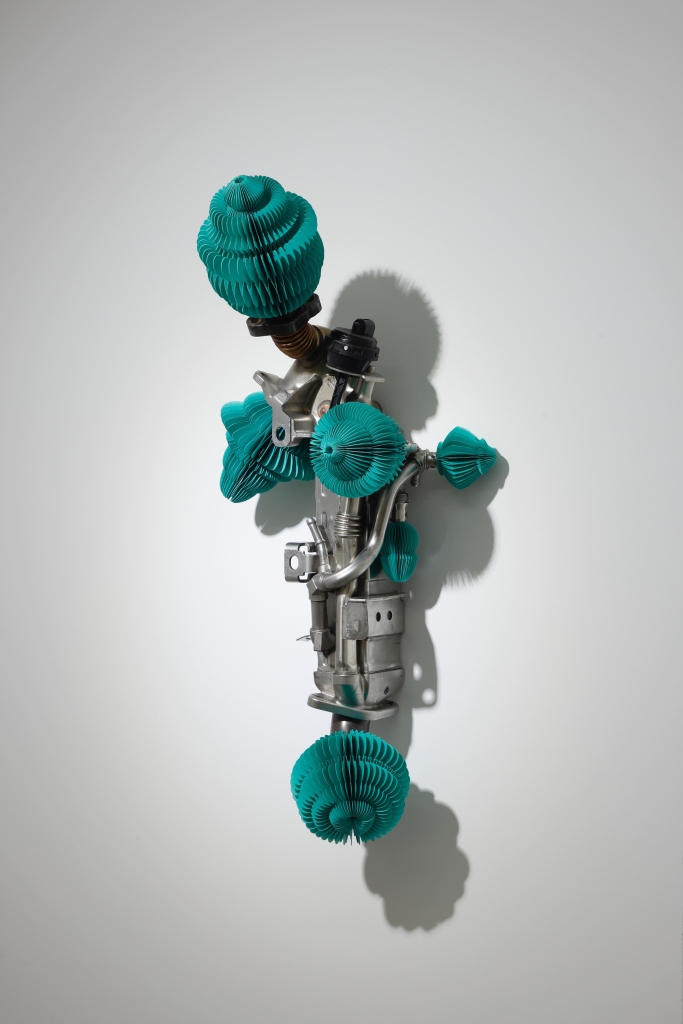 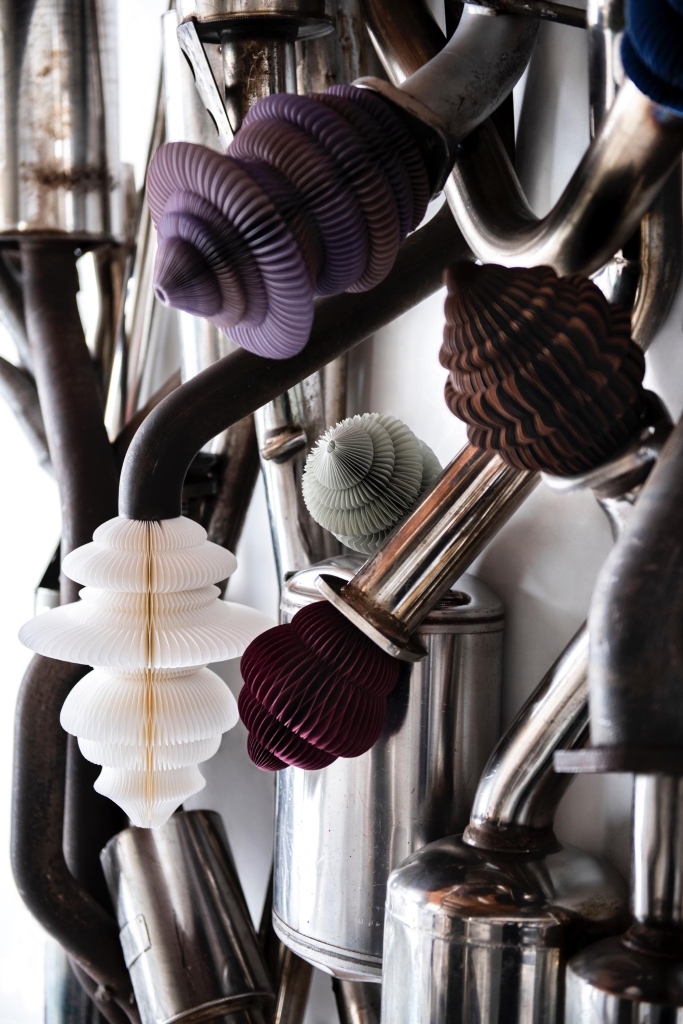 MAHO KUBOTA GALLERY is proud to present Relativity of the thing, a solo exhibition by London- and Tokyo-based sculptor Keita Miyazaki, opening on April 19, 2022.

Keita Miyazaki lives and works in two great metropolises, producing sculpture in London and suburban Tokyo. His practice involves creating structures comprising components of the exhaust systems of old cars combined with soft materials like paper and felt. The first thing that catches the eye when you view his work is the aura of elegantly-flowing solidity of the auto parts that make up the structural frame. Sculpture using scrapped automobile parts as the main material is not particularly new, as shown by the art of César and John Chamberlain in the 1950s and 1960s. Apart from perhaps the approach of presenting mass-produced objects as ready-mades, it is hard to find influences from these two artists in Miyazaki’s art, but his art does show a clear connection with that of Anthony Caro, who represents contemporary British sculpture of almost the same generation as artists like César, and with that of Richard Deacon, a British sculptor of the following generation.

British abstract sculpture since Caro has been characterized by flowing, unconstrained poetic language, despite the use of hefty and bulky materials like metal and wood, as if eluding the static state that had previously been the fate of sculpture as object. Artists have been able to develop their ideas freely by combining materials in a playful way, creating poetic sculptural rhythms through processes not unlike musical improvisation. Miyazaki studied sculpture in the master’s program at the Royal College of Art in London. A rich sculptural narrative seems to exude from the heart of his work, created by finding beauty in unwanted, scrapped parts and turning them into art based on his own rules, and the origins of this richness seem to lie in the output of his innovative predecessors in British contemporary sculpture. After fully accepting their gift, Miyazaki has repeatedly taken the practice further, combining it with his own insights and the physical instincts of his hands as they create the objects.

In this way, Miyazaki’s art has matured and developed in an environment far removed from the trends seen in Japanese sculpture today. Old automobile parts possess beauty, and movement is created by turning them into art. Representing capitalism in concentrated form, the parts are compact structures designed to reduce air resistance and do only what is required of them. As a result, they possess the beauty of efficiency. Having lost their original purpose, these components manufactured by modern industry are instilled with new life once they are reimagined by Miyazaki from zero, adorned with felt and paper to provide soft, colorful elements of visual form. The energy once routed through the exhaust parts now informs music visualized by the artistic intervention of the human hand. With such a backstory, each sculpture could perhaps be seen as a combined criticism, representing both censure of mass consumption and the concept of the ongoing loss of automobiles. However, by creating a hybrid sculptural language, Miyazaki has taken a different stance from that seen in the works of César and Chamberlain, as stated above. Standing before his works, there is no need to rehash past arguments. The objects that I see before me resemble lifeforms resonating with today’s age—objects that seem intent on being dynamic, constantly in pursuit of motion.

This solo exhibition, Relativity of the thing, presents four new works—an expansive tableau-like piece that covers the gallery wall, a free-standing work that combines colorful elements of visual form, and two small works. Each possesses an aura of solidity as well as elegance created through Miyazaki’s characteristic combination of old auto parts and forms created from paper, felt and other materials.

The muffler, otherwise known as an exhaust silencer, absorbs the sounds of explosions when fuel is combusted in an internal combustion engine. Keita Miyazaki often incorporates mufflers into his sculptures.

Miyazaki, who studied craft metal casting in the Department of Crafts at Tokyo University of the Arts and sculpture at the Royal College of Art, has focused on both casting, which deals in depth with material rather than form, and contemporary art, where artists select from a range of materials in the creation of visual forms. As can be seen from his career, despite having acquired the casting skills that allow him to form new shapes using molds, Miyazaki’s current practice involves projects based on automobile mufflers, metal objects with predetermined shapes. In the course of working with metal in his casting projects, he seems to have discovered the diversity of forms that mufflers can take, as well as the attraction of creating new forms by combining these shapes. The source of his art’s distinctive appeal lies in how he turns mufflers, which contain craft-like elements despite being mass-produced items, into sculptural artwork.

On seeing sculptures that combine papercraft flowers using red, yellow, green, and other colors of paper with metal mufflers, many people would readily recognize them as Miyazaki’s work. From his art, one senses the beauty and strength of organisms that harbor a wealth of color in their bodies even though they go unseen, like the flowers of a cactus blooming in the vast expanse of a desert or coral living quietly in the ocean depths.

Miyazaki buys mufflers from scrapyards and used parts dealers, then turns them into sculpture. Stains and scratches are noticeable here and there on the metal components, and when you view them as art, you get the feeling that some entity or spirit dwells within the mufflers, perhaps because of the addition of ‘flowers’ that communicate the robust vigor of living organisms. The artworks of Keita Miyazaki are gardens where spirits dwell and play without cares, bringing flowers into bloom.