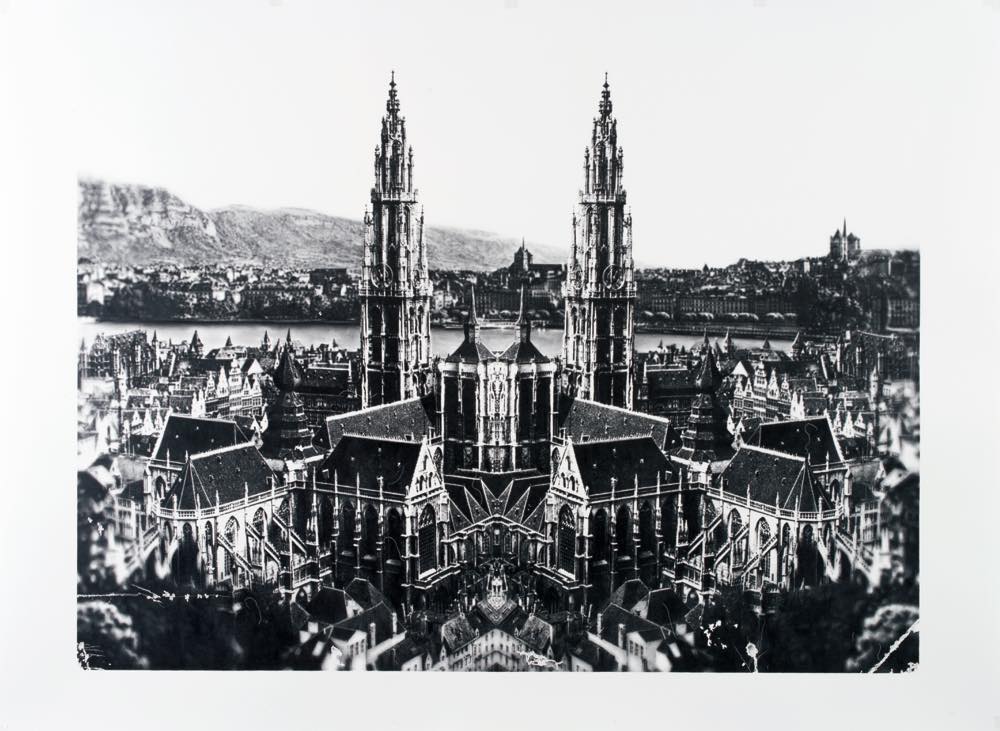 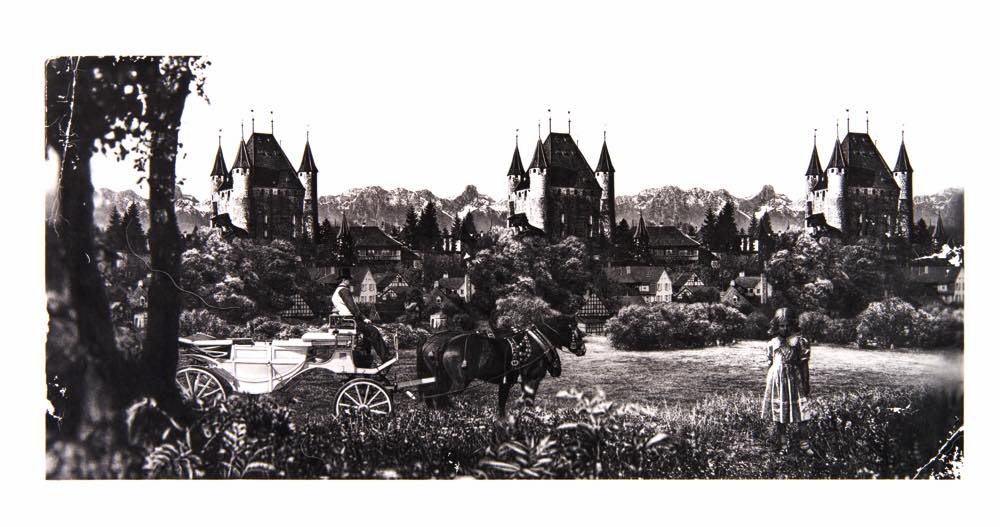 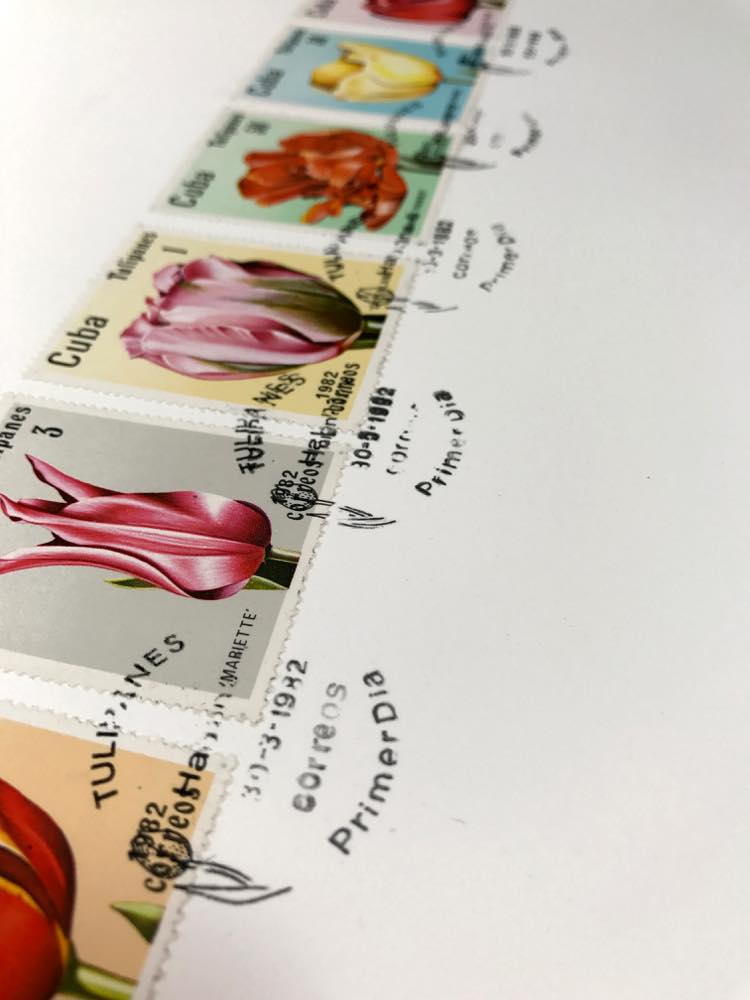 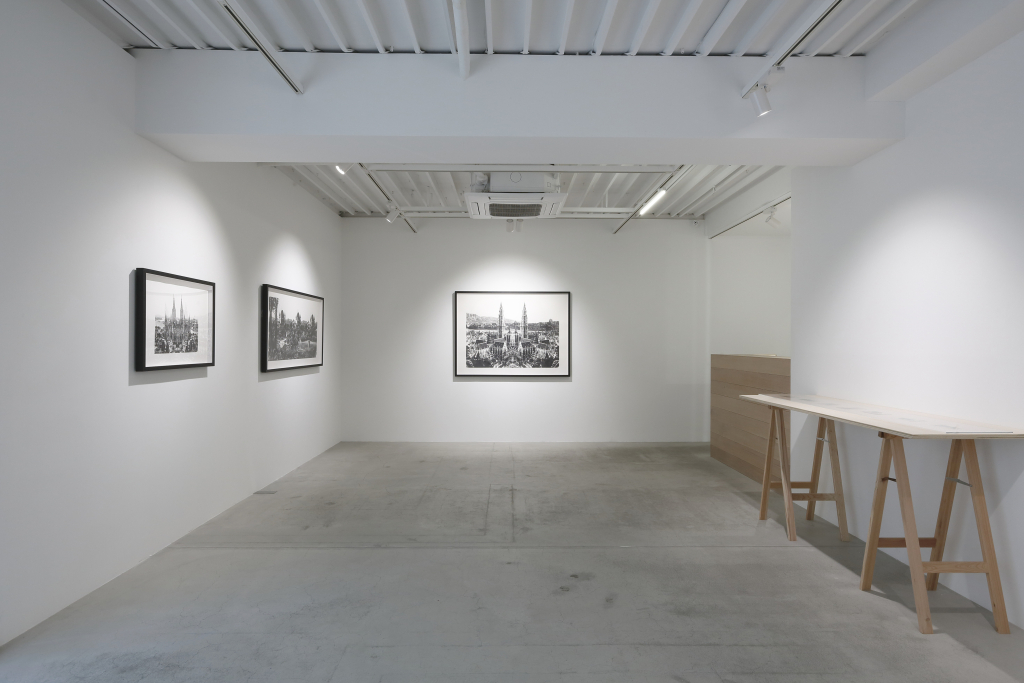 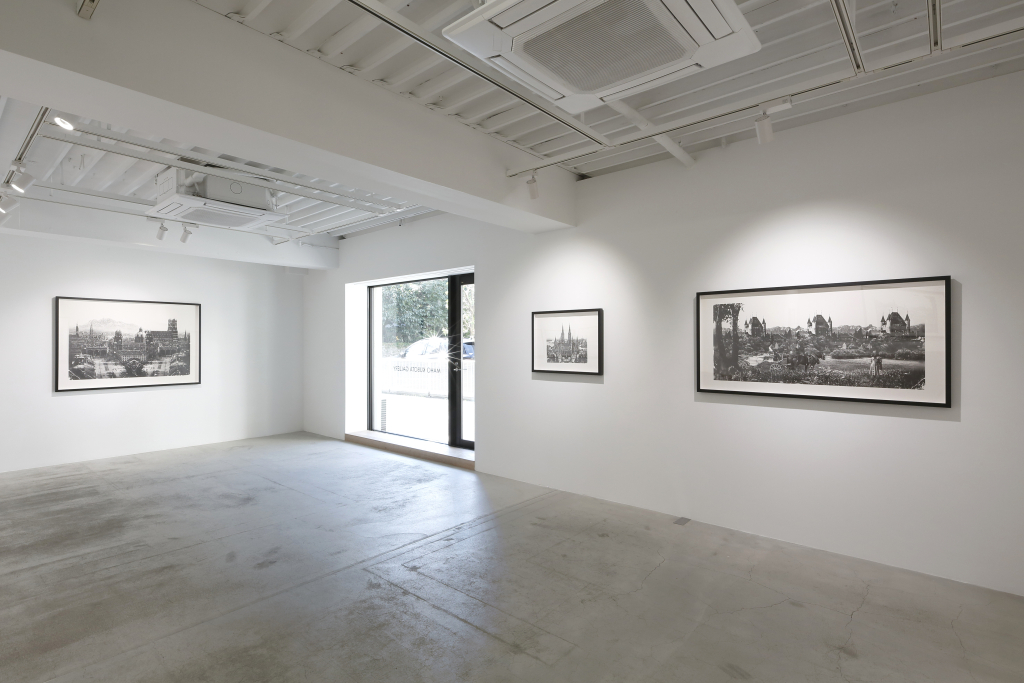 Featuring mainly new pieces drawn in pencil on large Arches paper 110 x 150 cm in size, this exhibition consists of fourteen large and small works, including small works such as postcards in which Ogawa distills his modes of expression into small formats, and collage works with a stamp motif.

The methodologies and techniques behind the artist’s works are unique; contemporary art in Japan has nothing similar to offer. Globally, they are unparalleled. As could be seen in the introductory part of the exhibition room of last year’s solo exhibition at the Chiba City Museum of Art, large pencil drawings are the focus of Ogawa’s art today. When looked at from a slight distance, they resemble large old monochrome photographs, and give you a sense of déjà vu. But when viewers come close and view a work carefully, and then realize it was drawn using pencil over a long period of time by Ogawa’s own hand, they are initially amazed by the artist’s extraordinary drawing technique.

However, those large pencil drawings are not pictures for the purpose of showing off his transcendent mastery with the pencil. Ogawa has a completely different motivation for peering within existing images using his transcendent powers of depiction. No doubt, the intensity of his work is certainly supported by his remarkable skill. But his technique is simply a means to create a unique, mind-blowing world. So, what exactly does this world that Ogawa depicts and no one has ever seen before look like?

For example, in the Without You series, the artist erases a person from a painting or movie scene well-known to many people, and fills the empty space with a scene that was not depicted in the original work. The world is so seamlessly integrated as to make you forget that the subject is missing, and by eliminating the subject, it reveals a perfect, still scene, as if frozen. In his works dealing with the theme of symmetry / asymmetry, which are also shown in this exhibition, two structures that are identical in form, like fated twins, often a pair of buildings with towers, occupy the main subject’s position, with an asymmetric world in the background in contrast. The intensity of these strange scenes that could not exist in the natural world directly accesses the subconscious deep within the recesses of the viewer’s mind. It is as if you were suddenly administered a Rorschach test, giving your conscious mind a reflexive jolt, resulting in a shocking visual experience.

In the Rondo series, Ogawa creates startling worlds through repetition of the same image. Much like how the moon follows you wherever you go in the world. Regardless of where you go, a repeatedly appearing scene bedazzles us, as if a door to a multiverse were opened. It resembles the way that a classical musical composition still seems to develop in a truly elegant way, even if the bug-like presence of a scratch on an analog record makes the music return to the same place, playing the same phrase over and over.

Seen in this way, the worlds portrayed by Ogawa, even works of astonishing detail in which the technique was achieved by the human hand, can be thought of as being formed in a largely digital way. It is as if those worlds consist of overlapping icons, and at the same time an ocean of signs, developing inorganically and probabilistically according to a computer algorithm. These worlds occasionally transcend the will and decisions of their creator, Ogawa the artist, producing a network of densely packed signs and formulas that expand with infinite repetition.

How does Ogawa himself view this unique world emerging on the horizon in which analog emotions are completely dispensed with in this way?

Ogawa says, “Isn’t this world like a moiré pattern (interference pattern), which is the result of interference from multiple worlds that exist outside our own?” He suspects this world is manifest through the combination and mutual interference of projections from many worlds, similar to the world that appears on our retinas by sunlight being divided into a spectrum of seven colors and then recombined.

By taking this perspective and adding a few rules and operations, the world can change in all sorts of ways qualitatively and quantitatively. And, isn’t it the practical implementation of this that makes Ogawa’s works special, unique today and without precedent in the past. Therein lies an amazing perspective capturing everything from the level of the particle to the expanse of the universe, as well as the repetition and movement of perpetual interference on temporal and spatial axes far beyond human thought. This world of icons, which was nothing more than a vague image in the back of Ogawa’s mind when he began working on it, diverges from the artist’s plan during the process of creation, with the picture eventually coming to possess an independent life of its own. Would it be going too far to say that Ogawa’s art, including its early affinity with Renaissance paintings and religious architecture, occasionally makes you sense a divine perspective? At any rate, before they can even be solved, the enigmas posed to us by the works of Shinji Ogawa connect with new enigmas. Viewers spend a great deal of time in front of Ogawa’s art, fascinated by the enigmas his pictures pose.