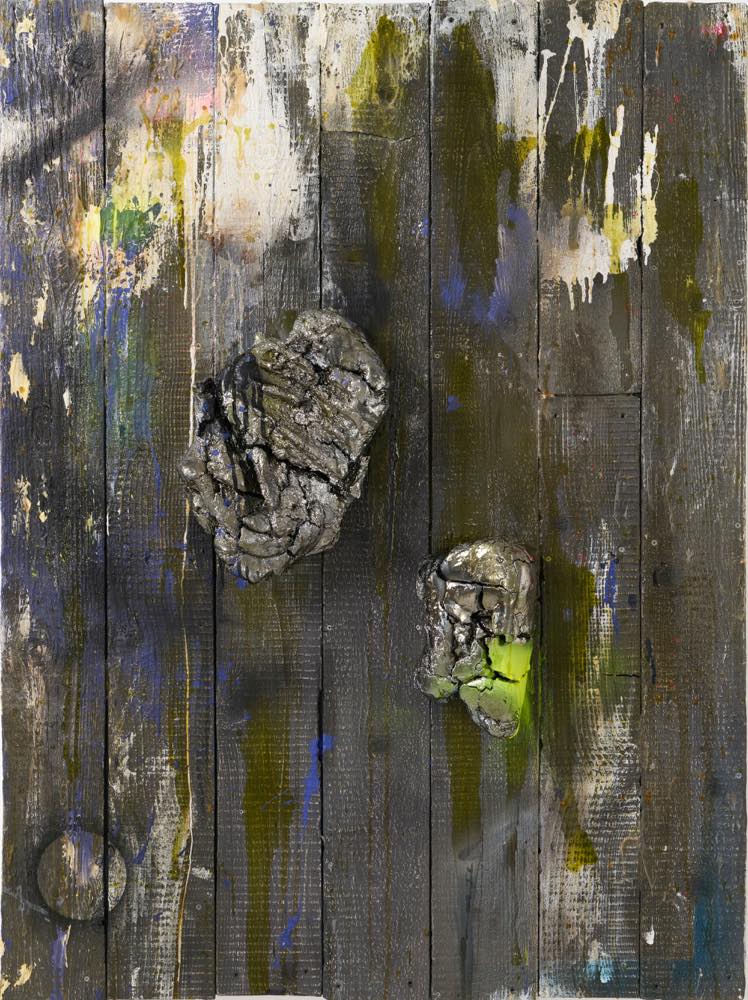 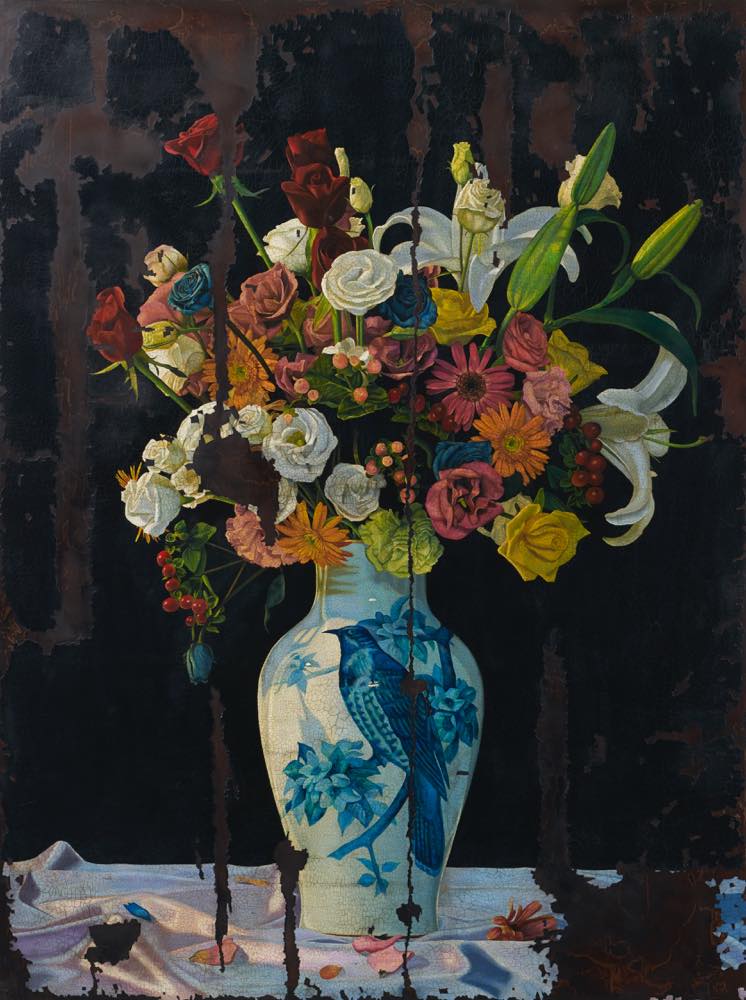 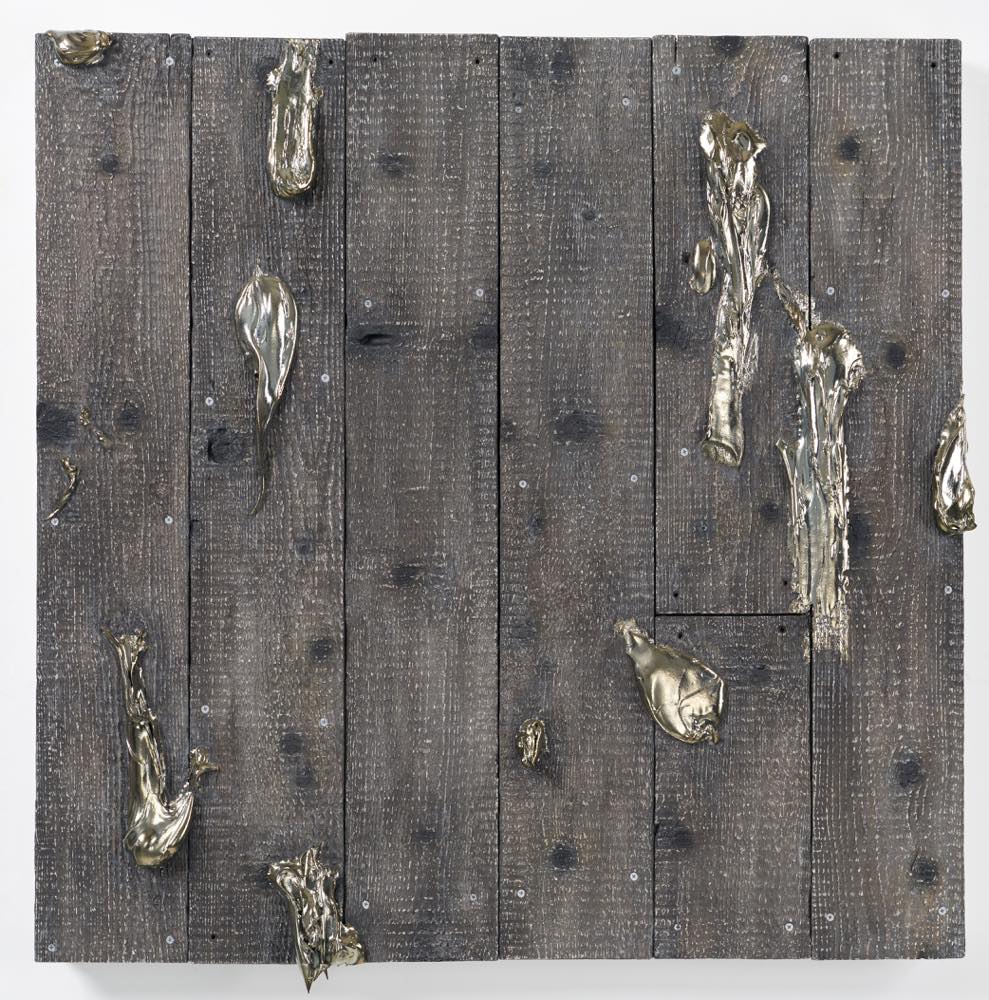 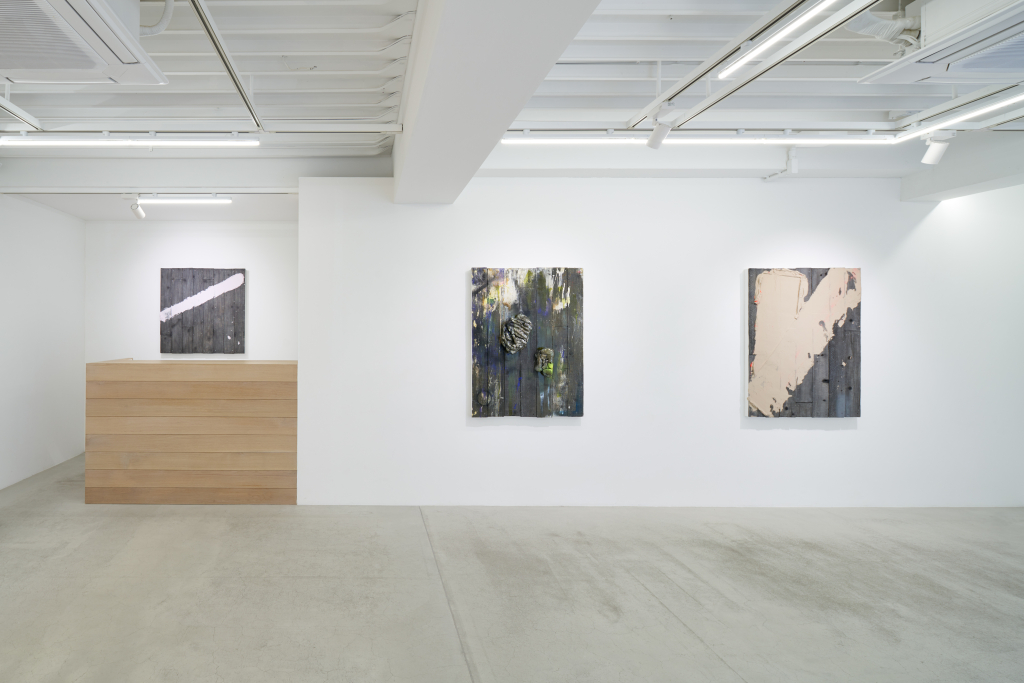 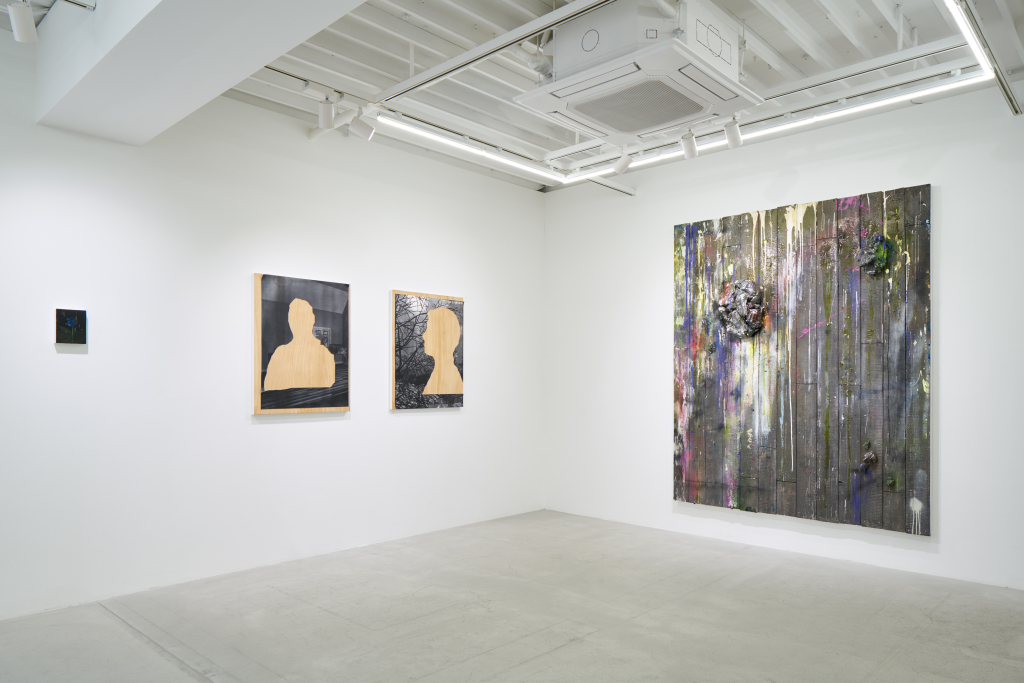 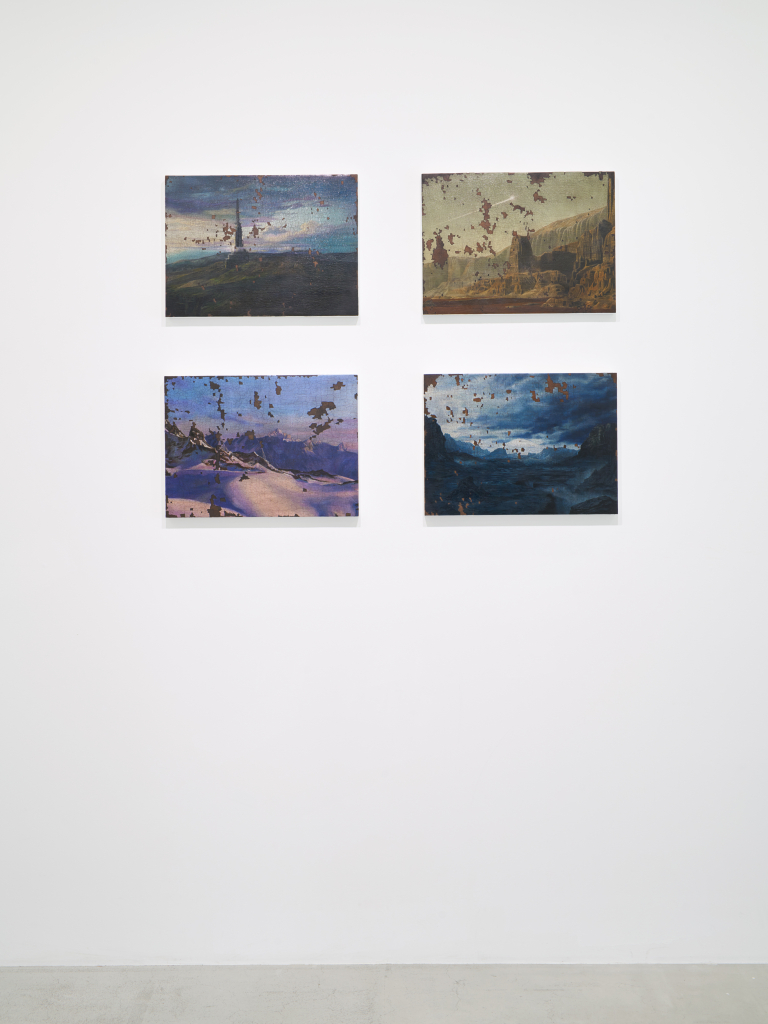 MAHO KUBOTA GALLERY is proud to present forge, a solo exhibition of new works by young artist Keisuke Tada, opening March 10th, 2017. The exhibition includes works from the artist’s trace/wood series, where either raw, physical expression reminiscent of action painting or the Informel movement, or else graffiti-like scrawls, are layered on top of a hyper-real background surface of “forged” visual data. In Painting of Incomplete Remains, the other series featured in this exhibition, the artist takes a finished painting in the classical figurative style and freezes it, presenting it in its defrosted form with sections missing. By creating differing layers within a single painting, bringing them into conflict with one another and forcing negotiation, he attempts to create a chaotic din, a distortion of time. The exhibition presents ten or so new works by Tada, predominantly from these two series.

Encountering a painting from the trace/wood series for the first time, you would be forgiven for assuming that the artist had cut out a section of the paint-specked wooden floor of his studio and casually hung it on the wall. Contemplating this rather commonplace bravado of a young artist, you might approach, and as you drew nearer, be surprised to realize that the work in question is actually a canvas, a painterly work meticulously planned to generate exactly the illusion you succumbed to.

And yet, even after realizing that the “floorboards” before you are created entirely through the medium of paint, most viewers will still find themselves doubting their eyes. Before being codified by the brain, visual information is supplemented according to past experience. It stands to reason, therefore, that even when we know for a fact that this representation of a floorboards is just a painting, it’s all too easy to take it for real wood.

Let’s consider an example. In one of the new works in this exhibition, two years after the conception of the trace/wood series, heavy-looking objects have been affixed to the wooden boards rendered in paint that constitute the first layer of the painting. Each object could be mineral, ceramic, or something else entirely. Its surface has been silver-plated, but this dully shining surface doesn’t give away the object’s composition. What weaves together the texture of this unknown thing with that of the “wood” base is the artist’s use of color—the simple coloration of the paint, either dripped across the canvas with a brush or sprayed. This object, whose identity remains unknown, is brought together with the codified wooden background, linked by color as material. While the texture of the imitation wood and the volume of the object emphasize the unreality of their existence, the interplay of color that joins them has a true elegance to it. It is precisely this interplay that means that, when viewing it as a single canvas, the painting’s bizarre sense of mass and movement come together and strike us, on a level quite apart from our doubt over whether this is “real” or not, as simply very beautiful.

These paintings seem to pose the question: Why was it not sufficient for the artist to simply cut out a section of floor and paint on it? If a painting visually indistinguishable from this one had been produced using a different process that involved sawing out a section of flooring, would it be the same artwork as this painting we now have before us?

The answer, surely, has to be no. Painting is fundamentally a means of conveying visual data. Here, the wood thrust in front of us as visual data is simply that—data. It is not an actual object, selected at random from nature. The trick Tada attempts is that of forging the “code” for wood. After creating a painting that reproduces the visual data of wood, Tada adds another layer of paint, all the while knowing better than anyone that the surface on which he is painting is not floorboards, but a painting he himself made. Of course, the new painting—the expressive means added on top of the original layer—is produced in full, complex awareness of this secondary nature, of this layering. For this reason, the paintings are consolidated entirely under the control of the artist, enabling the separate layers to be fused together to create a unitary aesthetic.

Alongside trace/wood, the artist has been working on his Incomplete Remains series since last year, 2016. The paintings making up this series are initially produced as crisp still lifes in a traditional style. Their surfaces are then aged to generate cracks and missing pieces, resulting in “forgeries” that appear to have surfaced from the distant past. The artist creates and freezes, deconstructs and regenerates his work, and we sense that here too, Tada is making fundamental inquiries into the nature of painting. Some of the missing pieces give viewers a glimpse through to the surface behind the layers of paint. The function of painting is to show the layers of its paint applied to the support, and it is with this viewing, this gaze, that it finds its completion as a painting. A painting is a way of making one kind of data stand in for another, but apart from this function, it has a conceptual, an emotional and also a material life. It may feature subjects or motifs, but its materiality can change the painting in a way that overrides the intentions of its creator, sometimes even invalidating the original meaning of what the painting depicts. When we look at ancient Egyptian tomb paintings, we are looking at the way the ancient people lived, but we are also seeing there the vestiges of time immemorial. The accumulation and layering of time brings about aesthetic elements not initially planned, and when we look at a painting, we necessarily evaluate it together with those unplanned elements. This issue also has connections with the weighty issue of what constitutes a painting’s completion.

Keisuke Tada was born in 1986, at a point in time when the painting was already dead. Like other painters of his generation, he actively chose to take up his brush in full knowledge of this. Even in today’s contemporary art climate, where it can seem like every possible form of exploration and experimentation has been done before and there is nothing new left, people are still seeking works that will become “the paintings of tomorrow.” Creating, deconstructing, reconstructing, mixing in expressive elements sourced from outside the world of painting, departing from conventions, approaching the issue from a digital standpoint—the possible solutions are multifarious, and depend on the individual artist in question. Tada has chosen to preserve the set form that is the canvas, approaching it from head on in order to conduct his experimentations, which are apparently concerned with zeroing in on the very essence of painting itself. The bracing freshness of this newest set of paintings presented at Maho Kubota Gallery is proof that Keisuke Tada has already made the first steps in producing his own ambitious solution.