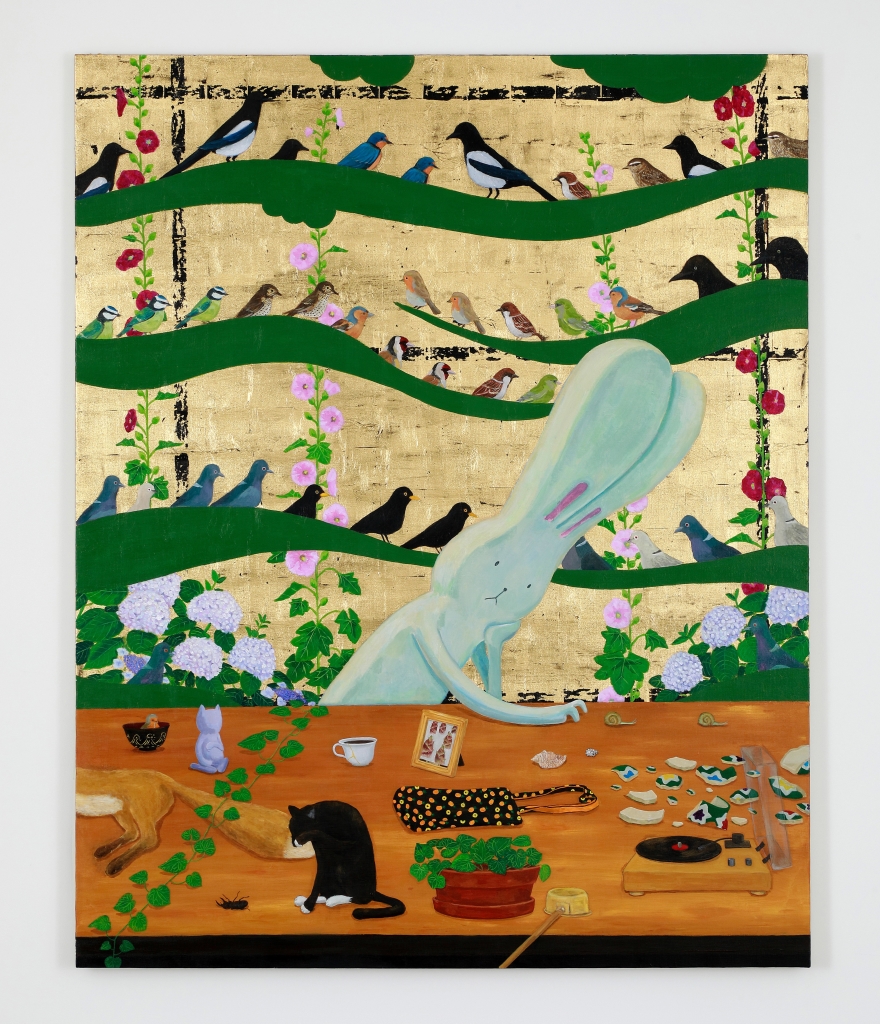 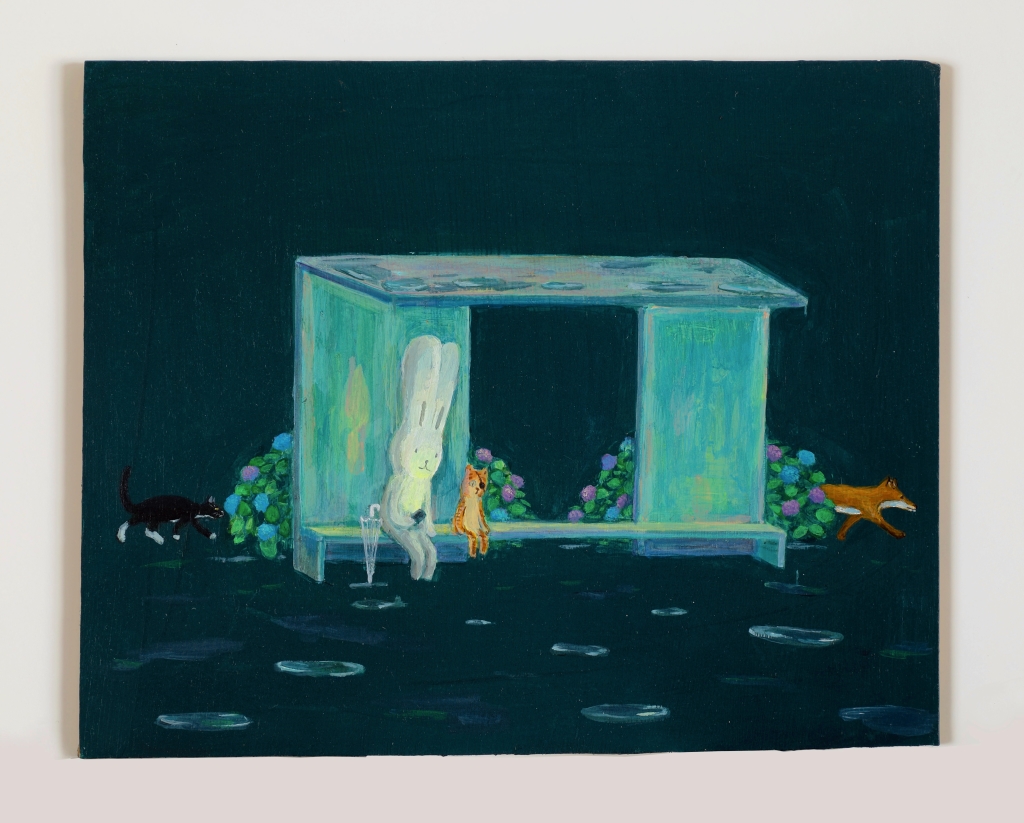 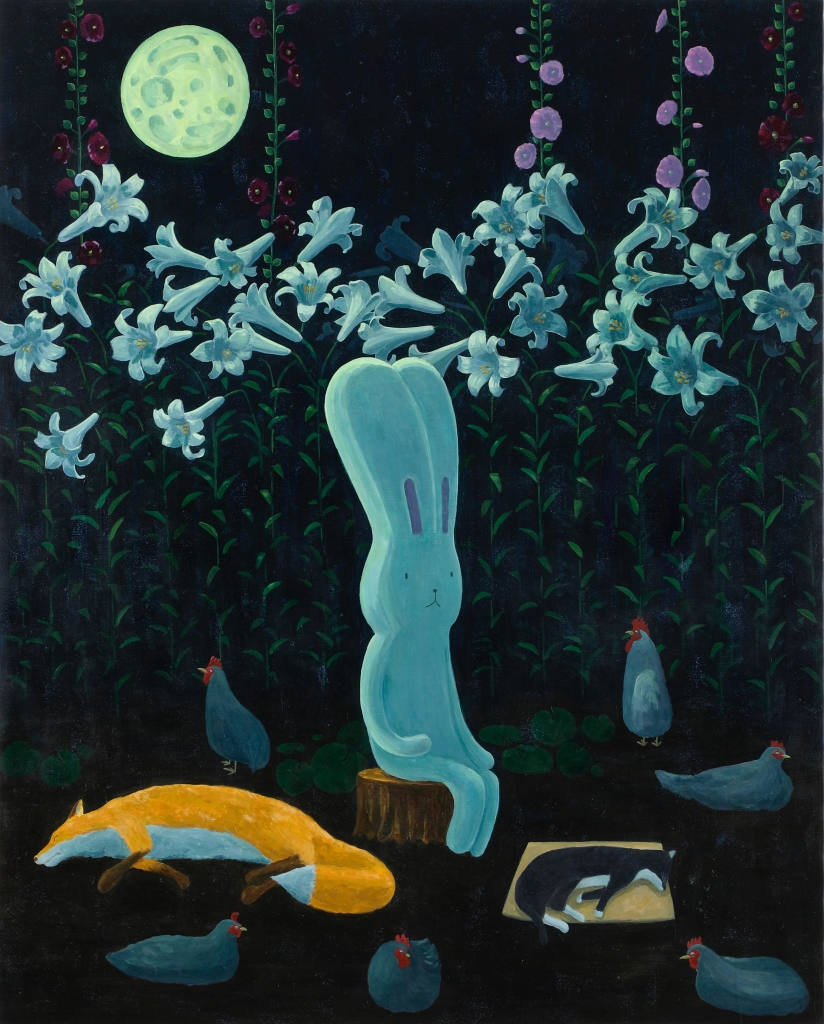 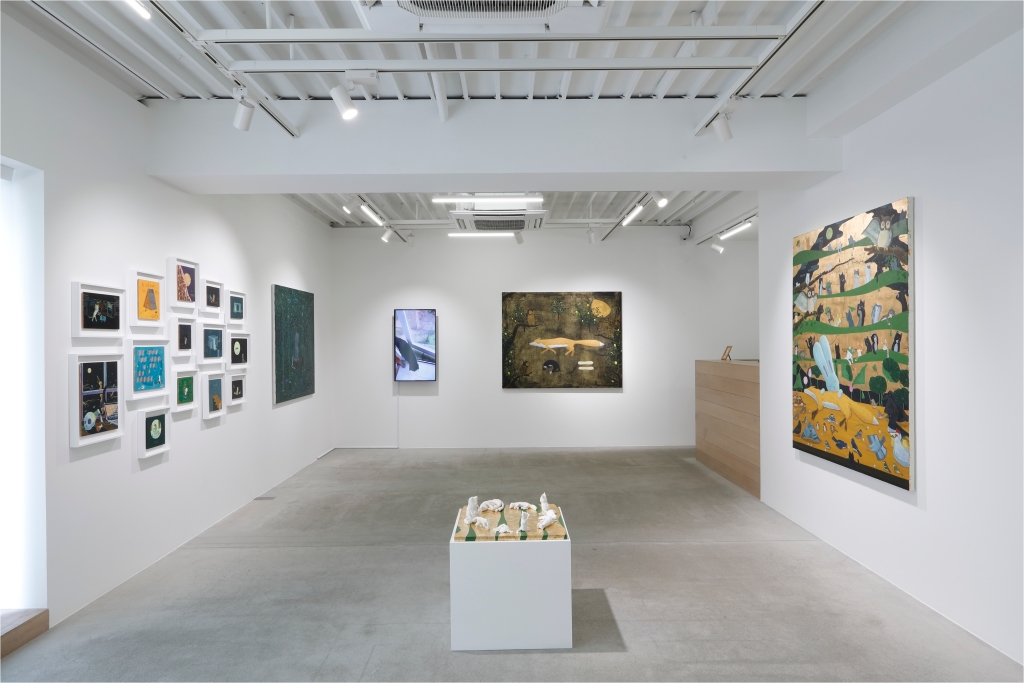 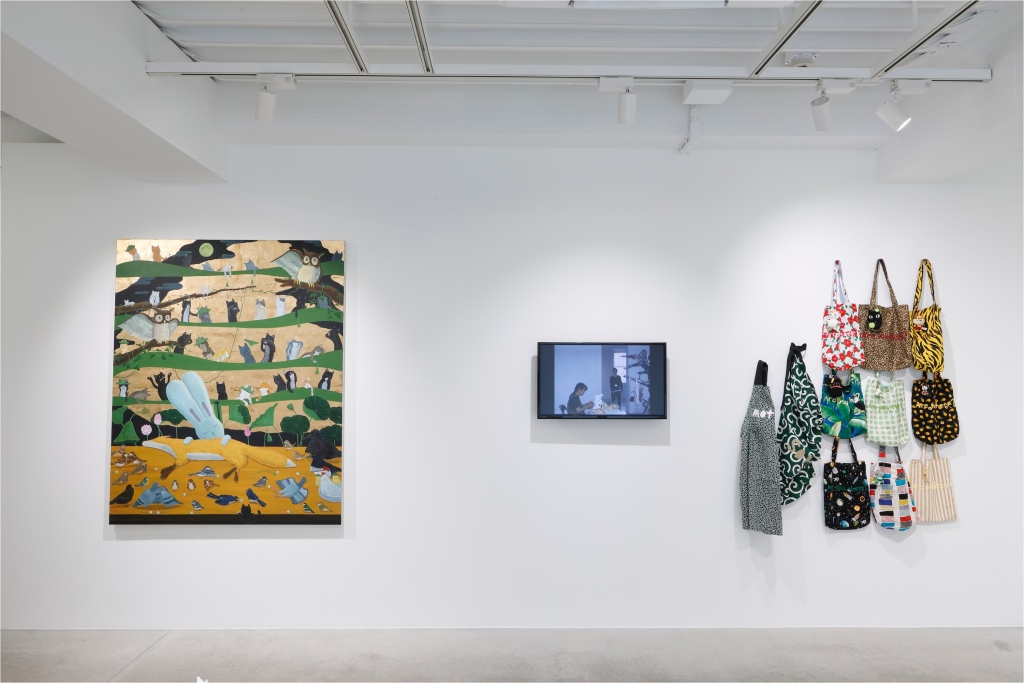 MAHO KUBOTA GALLERY is proud to present It always comes: a solace in the cat, a solo exhibition by Atsushi Kaga, opening on September 10, 2021.

Kaga spent his teenage years in a commuter town typical of the kind that can be found in the suburbs around Tokyo. He would collect stickers and cards, play video games with friends, and watch as many rental videos as he could of Western movies. On the way home from school, he would find himself dropping by convenience stores and reading a wide variety of manga comics. And, the following day, he would go to school and do it all over again. Then, as a young man desiring to escape the everyday life of the town of his birth, Kaga went to Ireland. He originally wanted to pursue a career in film, but he was late in submitting his university entrance application, and ended up entering the National College of Art and Design (NCAD). He majored in painting in his second year, and after graduating from university, he held his first solo exhibition at Mother’s Tankstation, a gallery that opened in Dublin that year. Kaga’s painterly language, fostered by his life in the Tokyo suburbs and Japanese subculture, as well as his rich worldview, which incorporates a mixture of art history, philosophy, and Celtic culture that he studied in Ireland, make his art truly unique. His surreal paintings, depicting unique characters like his bunnies and his bear, became a hit, bringing an increasing number of chances to present his work. For eleven years—from 2007, when he held his first solo exhibition in Dublin, until 2018, when he finally debuted in Japan—Kaga held a series of successful exhibitions at venues in cities such as São Paulo, New York, Berlin, Miami, and Hong Kong, but none in his home country.

This solo exhibition, the second Atsushi Kaga solo exhibition at MAHO KUBOTA GALLERY following the artist’s first show here in 2018, clearly reflects the artist’s experience of the past year and a half, including his Tony O’Malley Residency in Kilkenny, Ireland, where he spent last year. As was the case with many other artists, with everyone separated from society during the pandemic, Kaga spent a year on his own looking inwards. He has clearly broken new ground with this group of works, earnestly facing his inner longing to paint throughout the fulfilling time spent in Kilkenny, resulting in works that feel as if he were channeling the artists of Edo Era Kyoto and the masters of Western painting.

This spring, Kaga once again set up an atelier in Kyoto, and in preparation for this exhibition painted works dealing with major themes as never before. The characters depicting anthropomorphized animals like rabbits, bears, and cats are still present in almost all of the works, but it feels as if they now appear as anthropomorphized ideas or messengers, rather than simply anthropomorphized characters. In his paintings, we see an unmoving fox with eyes closed, as if it were dead, a cat looking silently towards the viewer, a lily illuminated by the moon, vegetables in many different colors, and the cat called Whitesocks that visited Kaga’s atelier in Kilkenny every day. A kind of spiritual ambience permeates throughout, creating a world that unfolds like a daydream in which you open an invisible door on the side away from reality, like a spiraling timeline of memory and loss, rebirth and hope, repeatedly appearing, and then fading away.

The plan for this exhibition, entitled It always comes: a solace in the cat, consists of about eight works on canvas painted in Kilkenny, Ireland and Kyoto, Japan, more than twenty small works, and two video works.

artist’s statement for the exhibition

It always comes: a solace in the cat

There are a few paintings I can think of straight away regarding portraits of mothers. David Hockney painted a colourful portrait of his elderly mother with his father. Arrangement in Grey and Black No. 1 by Whistler has a very unconventional composition as portraiture. Lucian Freud painted several sombre portraits of his mother. All of these paintings somehow show the artists’ relationships with their mothers, even if that was not what they intended to show.

It is called a performance, even though it is just my mother sewing tote bags, which she would make when I was a kid. I have noticed that the video footage of the performance we did together clearly shows my relationship with her.

She appears as a dead fox in several paintings in this show. The title of the show, It always comes, derives from a work of mine that I painted when my favourite Japanese actress Kirin Kiki passed away in 2018. It shows Usacchi facing a hand-painted wooden sign on the edge of a cliff stating “END”. This refers to the end, death.

But the title also refers to life in another video in the show. The video shows a tuxedo cat, Molly the cat, aka Whitesocks, repeatedly coming to my studio in Callan, Ireland. This cat, which belongs to a neighbour, came to our place almost every day for the last six months of my residency in Callan. She was a source of inspiration and comfort. Death, but also life, always comes.

This period coincided with the time my mother became ill and subsequently passed away, which has led me think about the cycle of life and reincarnation.

Quite a few cats are depicted in my recent paintings, something that stems from my sister’s belief that the dead can come back and watch us through the eyes of cats.