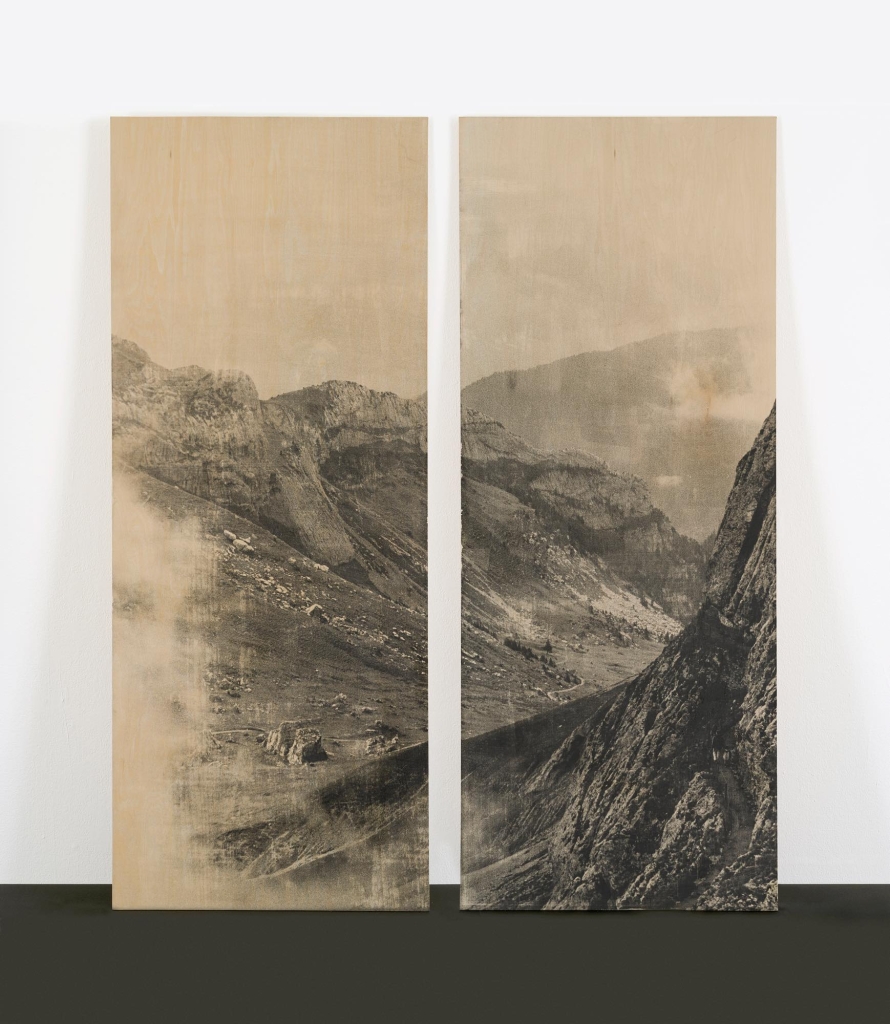 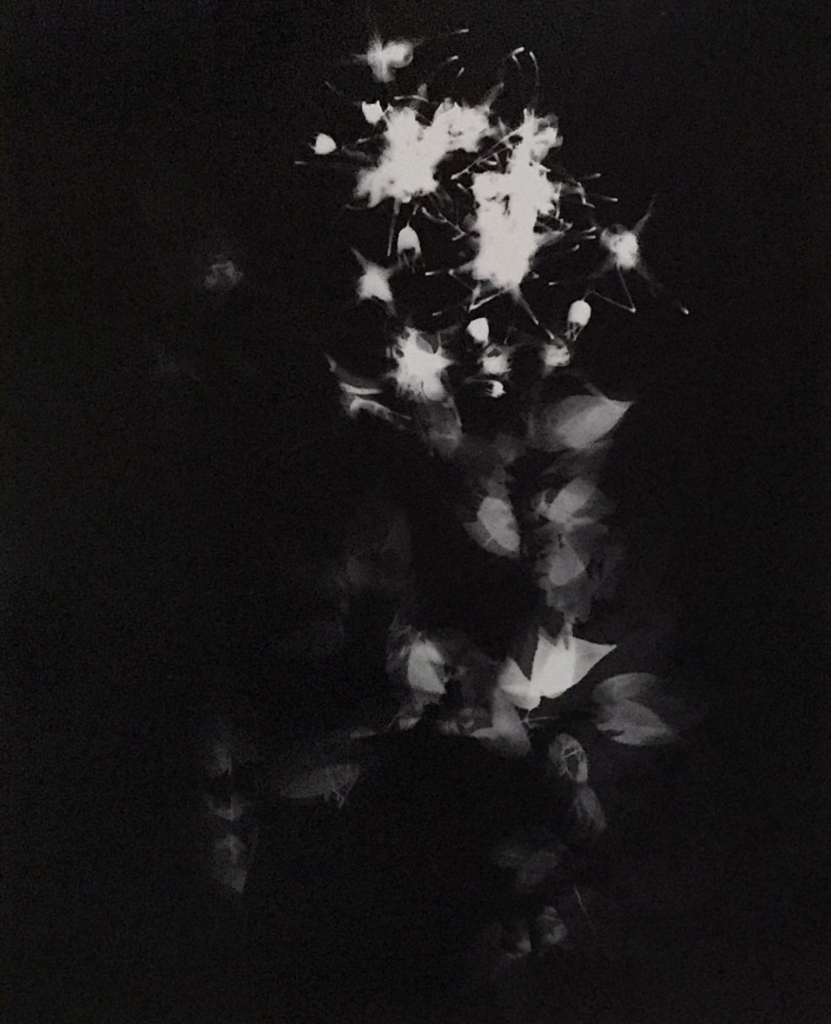 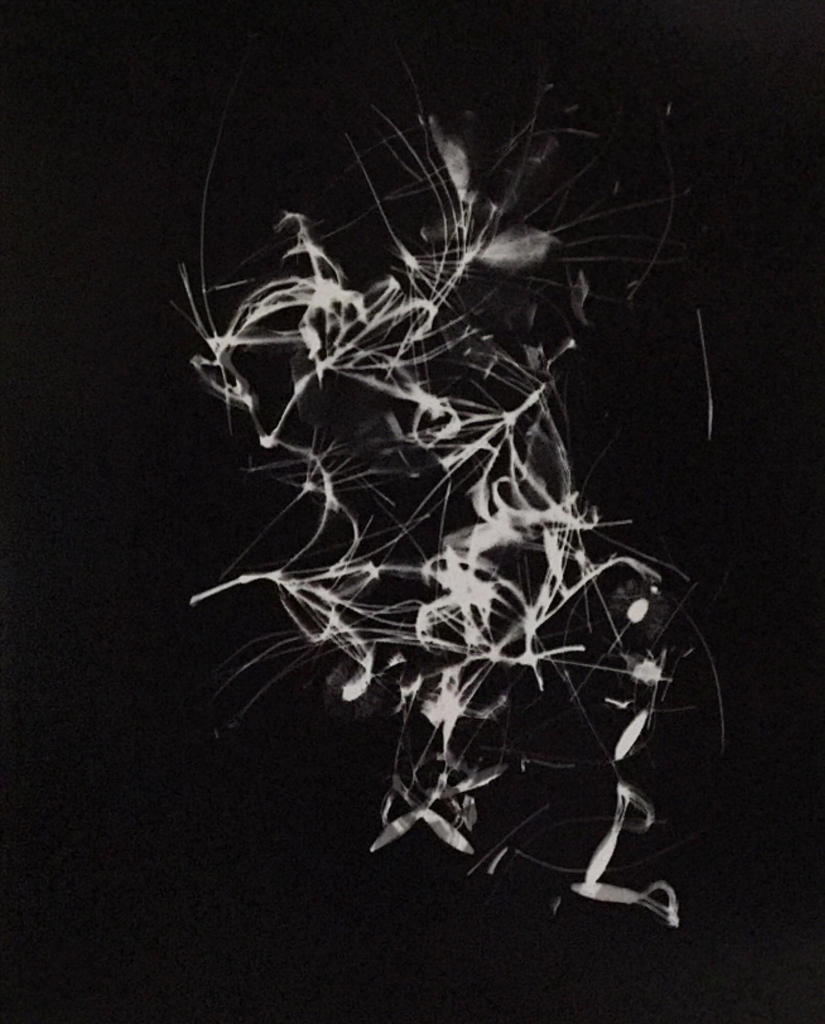 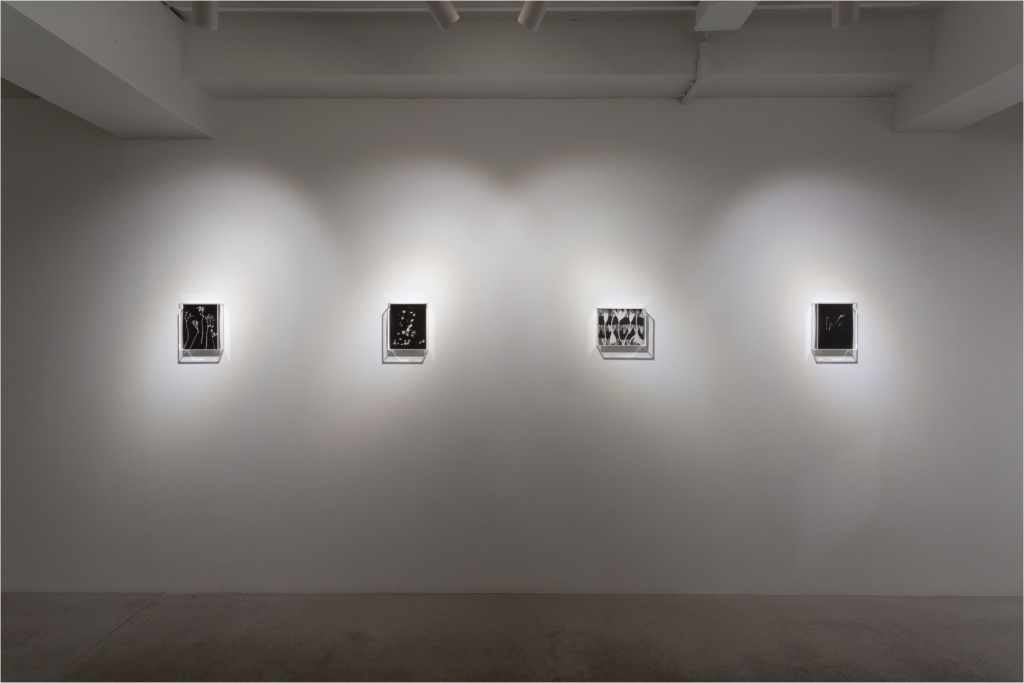 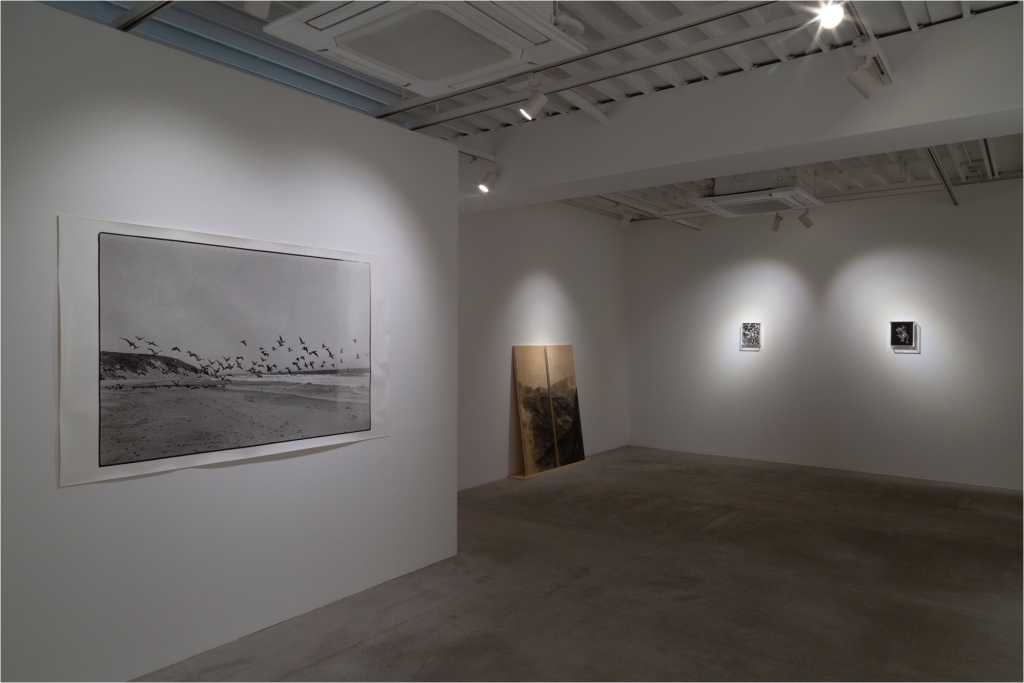 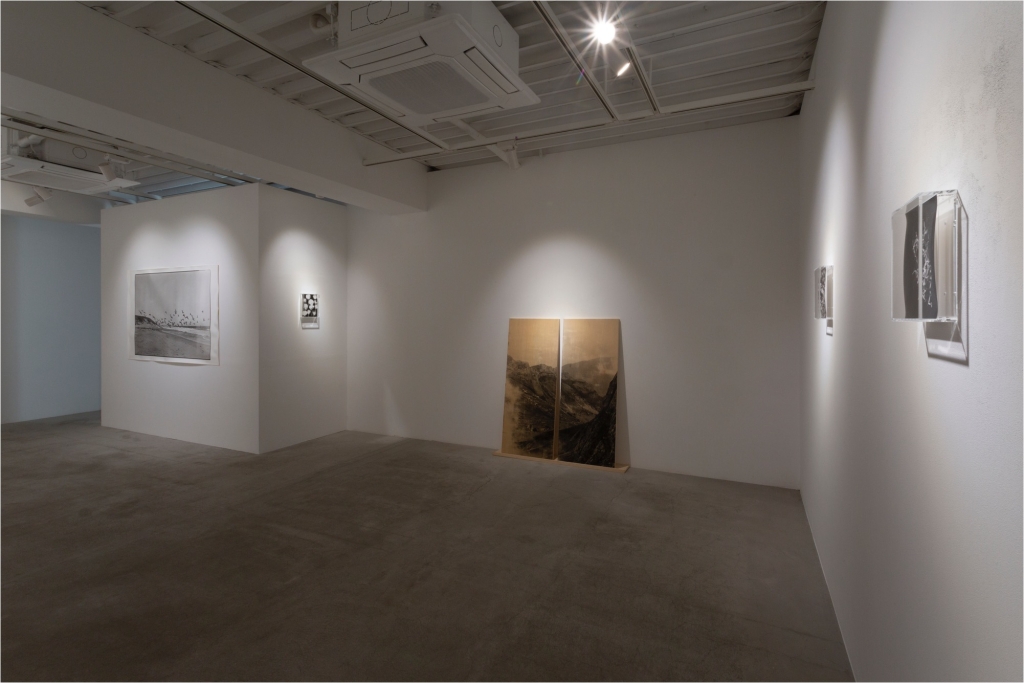 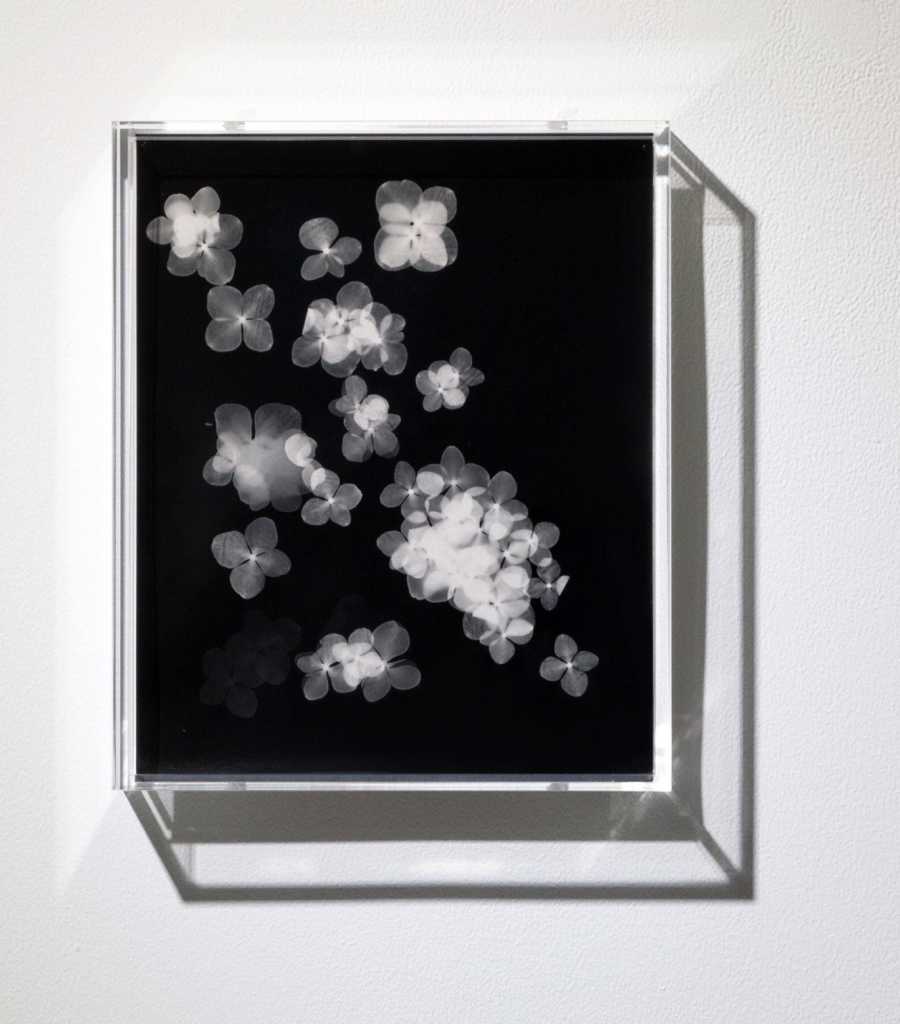 In this exhibition, Nagashima presents 8×10 photograms made by placing some of the many pressed flowers that she inherited from her grandmother on photographic paper, and landscape photos printed after applying a photosensitive emulsion to wooden boards. The photograms were shown at the Museum of Modern Art, Gunma and the landscapes at Yokohama Civic Gallery Azamino. Both sets are black-and-white photographs that Nagashima printed herself in a darkroom. They are presented here in a new configuration as an installation for this show.

Since the beginning of 2020, the world has found itself suddenly gripped by a pandemic. This calamity, which would have been difficult for anyone to predict, has greatly changed the lifestyles that we once took for granted. Major changes are occurring in the art world, as well. With our new ‘normal’ requiring us to maintain social distancing, an enormous number of images of art, more than ever before, are now being circulated and consumed through means such as virtual worlds on the internet. As images are being replicated, shared, and reproduced on a grand scale that makes them part of society’s shared experience, it feels as if a large, inexplicable cavity has opened up in the center of a whirlpool of weightless digital image flotsam.

Today, with everyone carrying mobile phones equipped with high-precision cameras and posting their shots on social media, photos have lost their gravity due to the speed of the process. They are seen simply as images, and are becoming increasingly detached from materiality. In light of this, Nagashima describes her ‘analog’ approach—using photographic paper and developing her works in trays in a darkroom—as a process in which she transforms “something thought of as a mere image into something that possesses substance and exists in the world.”

The exhibition takes the form of an installation configured so as to place a layer between the art and the viewer. In addition to being reproductions of images captured by eye in the past, the photographic prints possess material weight, suggesting symbolism that links to memories.

The artist made the following comments about this exhibition.

“Last year and the year before last, a chance to print black-and-white photographs by hand reminded me of how enjoyable it is to work in a darkroom. Printing photos by hand is like being in a dark place where you re-encounter and have a dialog with the images that you photographed.

Color prints are developed in complete darkness, but monochrome prints allow you to work using a red light. The lighting in the darkroom has a similar feel to that of my bedroom long ago when I would leave a small light on all night because I was afraid of the dark. The time I experience in the darkroom is like back then, when I would think about all sorts of things until I fell asleep. It feels like a world of mine alone, in which everything is ambiguous. It involves physical work, and relies on simple calculations, gut feelings, and luck.

That is where I transform something thought of as a mere image into something that possesses substance and exists in the world.

The spread of the coronavirus has caused people to grow apart, physically speaking. What I miss now is touching things, not looking at them. I feel deeply attached to the physical, material images that I produce while feeling my way around in the darkroom, where sense of sight is largely useless. Those feelings were so strong that I decided to shoot black-and-white photos in order to be able to print monochrome photos on my own.

I usually mount photos directly on the wall without framing them, but for this exhibition I decided to put something in front of the photos to act as a layer separating them from the viewer.