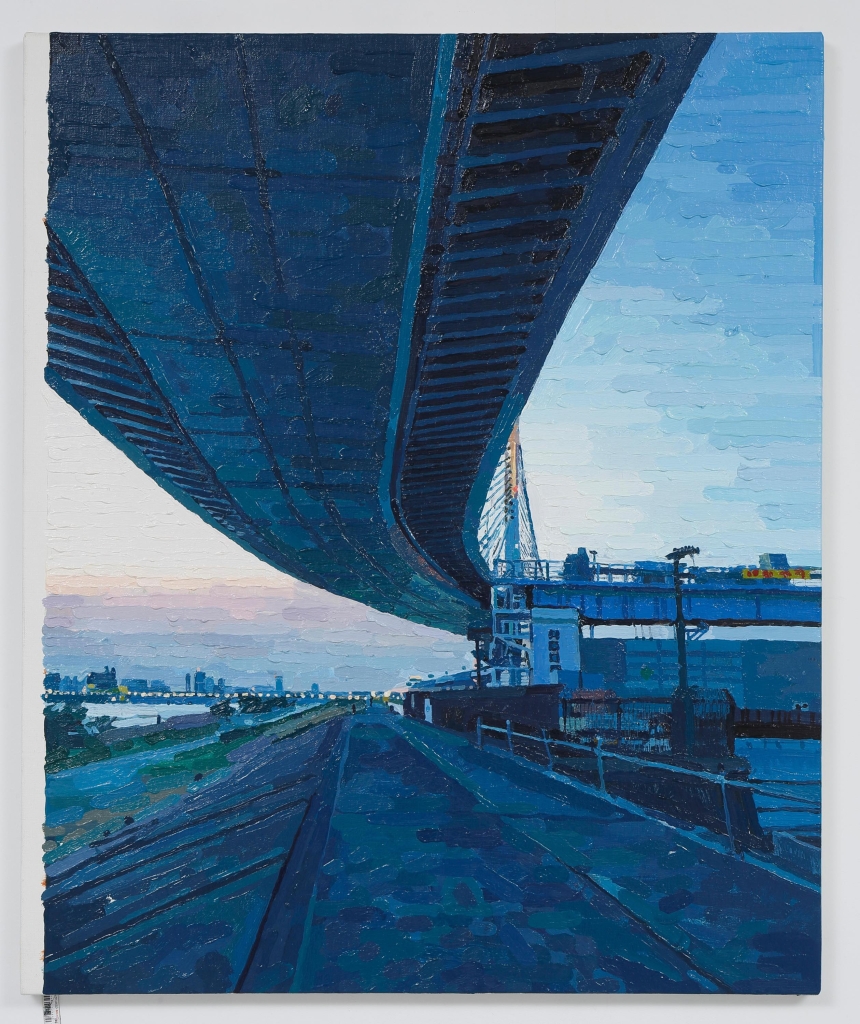 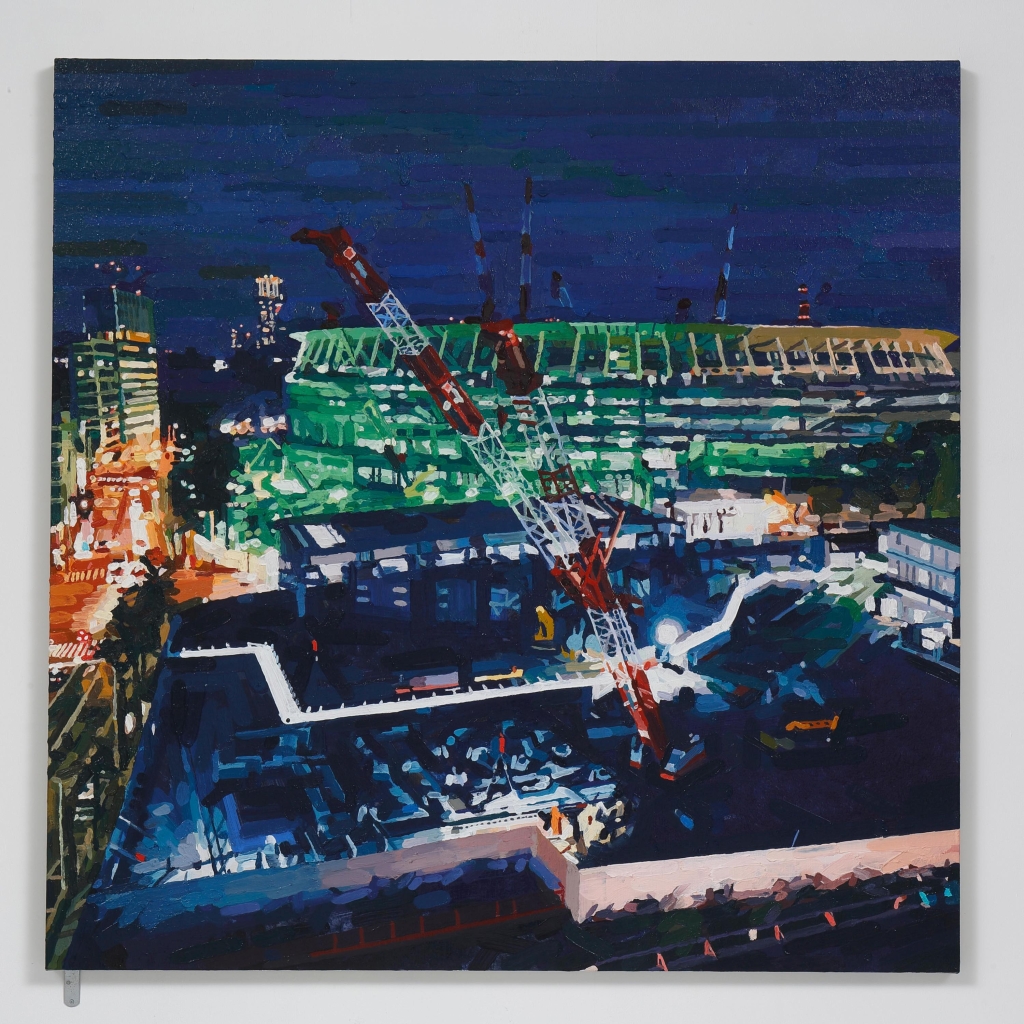 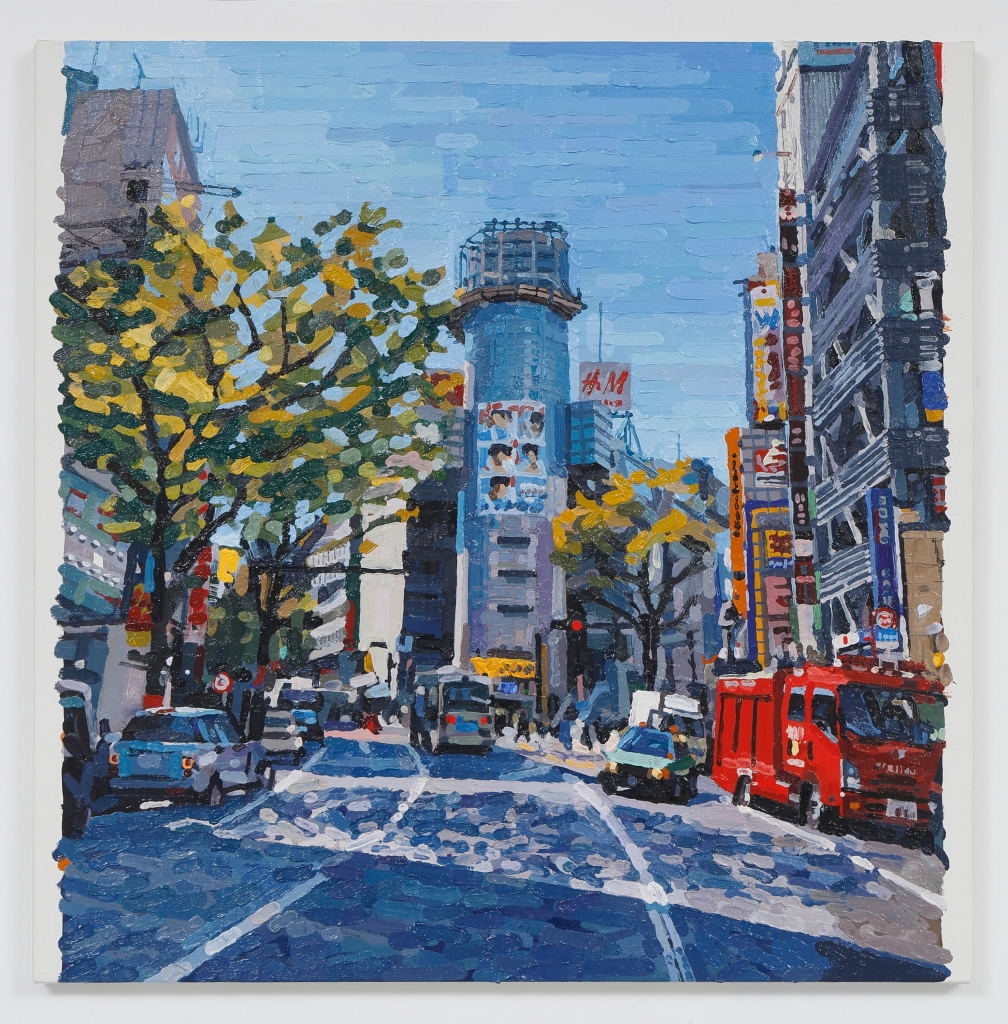 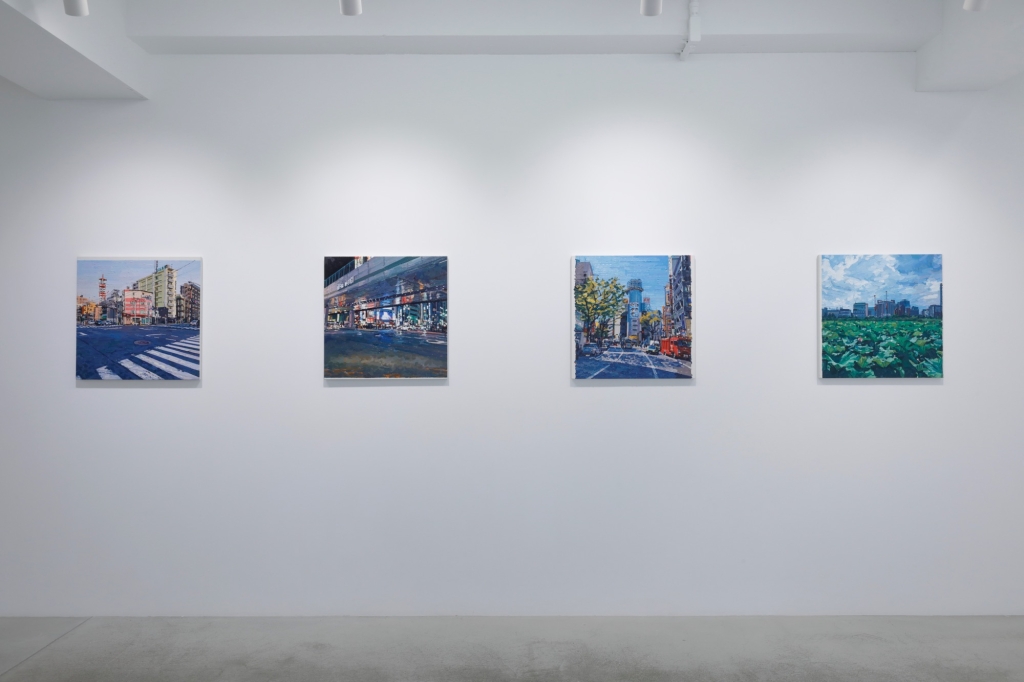 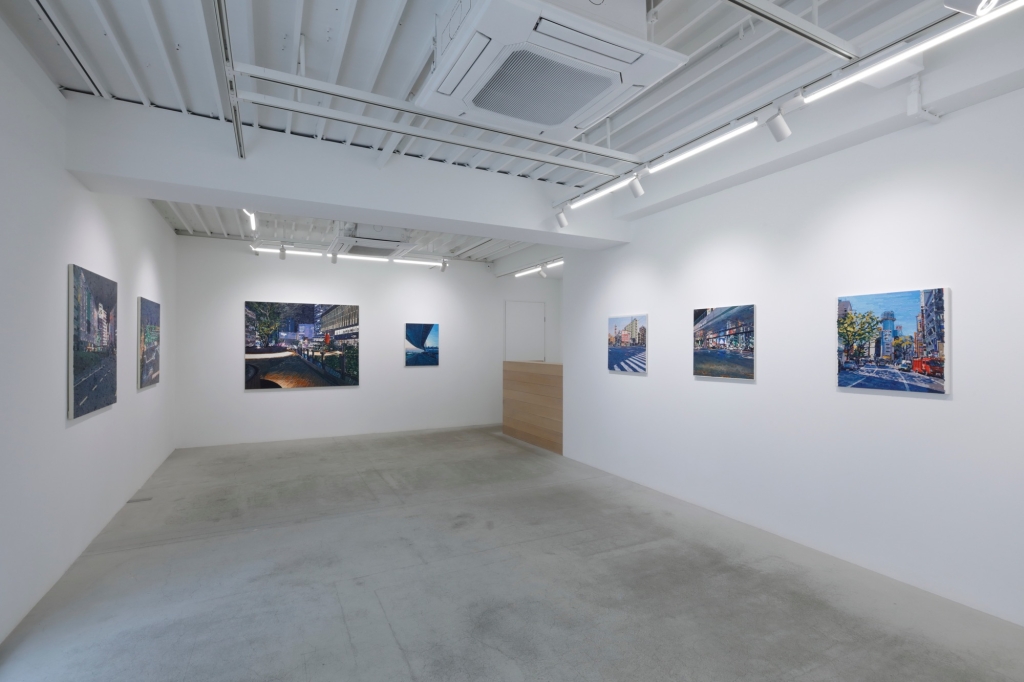 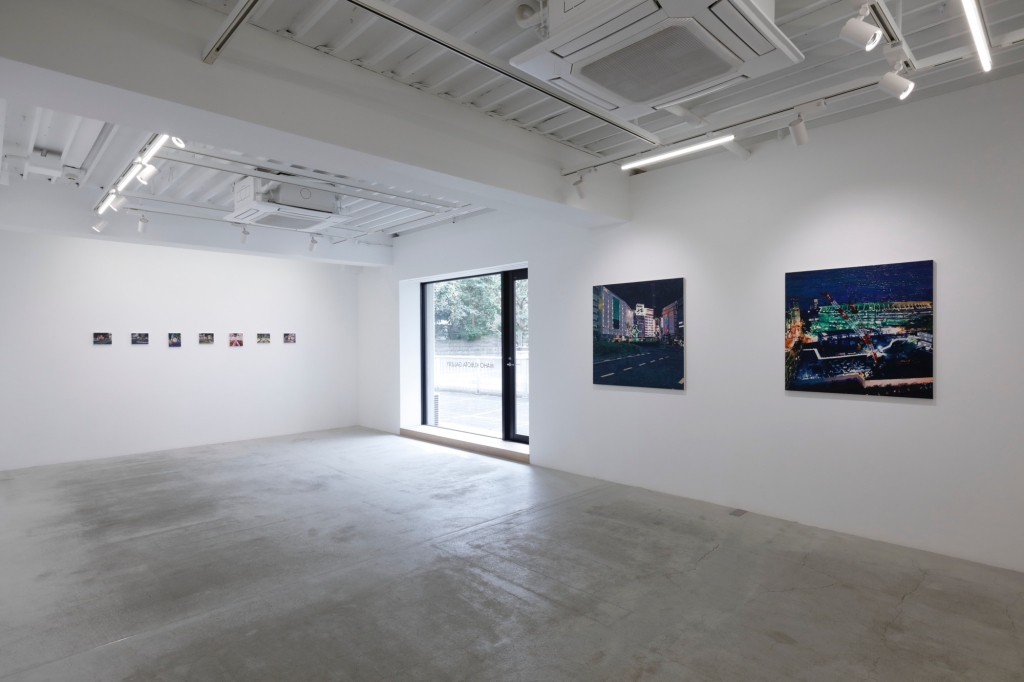 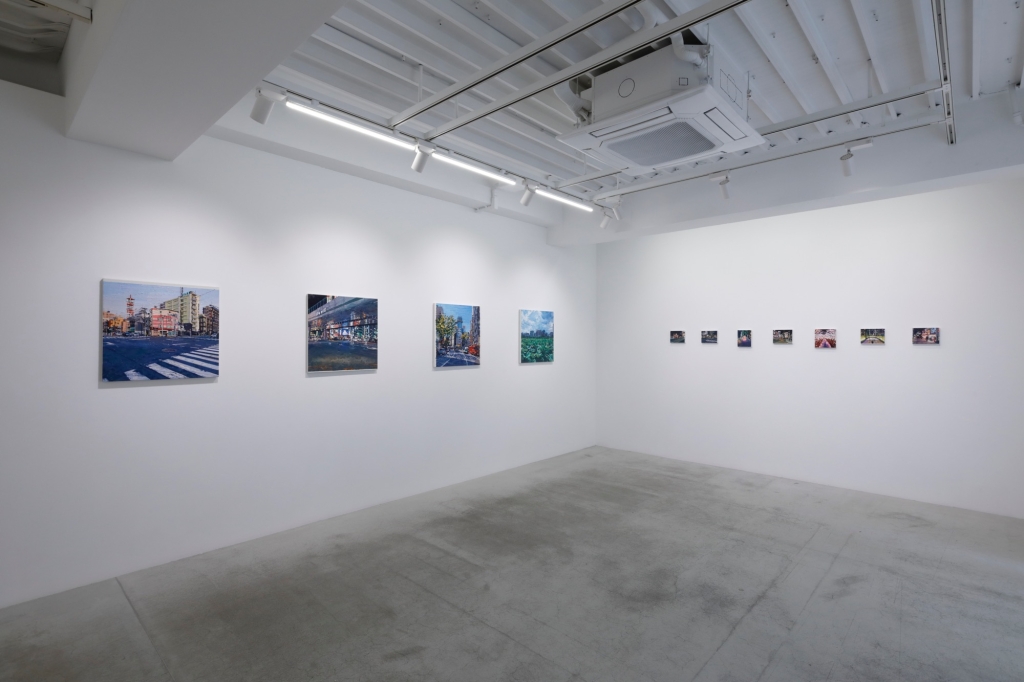 MAHO KUBOTA GALLERY is proud to present Tokyo, a solo exhibition by Naoki Tomita opening on October 18, 2019, featuring new oil paintings capturing modern-day Tokyo.
Tomita faithfully renders his landscape scenes in oils with the application of thick layers of paint. The scenes depicted include the façade of a vacant building, a completely empty room he was taken to by a realtor, a coin-operated parking lot, and a night scene of the city. The paintings, however, are devoid of people. Or have nothing more than signs of a gaze directed at a scene in which something is about to occur.

The vague feeling of loneliness in Naoki Tomita’s paintings of the city and suburbs can probably be attributed to their absence of human figures. However, there are absolutely no negative emotions—such as loss or resignation—among the feelings these paintings evoke. In fact, one senses something like the invigorating moment or faint spark that occurs when something has completed one role and is about to be reborn in new form.

For this solo exhibition at MAHO KUBOTA GALLERY, the artist’s first in three years, Tomita decided to paint the sights of Tokyo, which are in the throes of transformation as the city moves closer and closer to what the artist perceives as its landmark year of 2020. He spent several months working on the paintings. Although this approach of painting Tokyo as it is today might seem very straightforward, it would appear that the artistic stance he took to achieve his objective was profoundly influenced by his experience working on art projects on site at an artist residence program in the town of Tsunagi-machi in Kumamoto Prefecture, where he spent several months last year. Tomita grew up in the suburbs and studied painting at university in Kyoto, and had always worked under the gravitational pull of the Tokyo suburbs. For him, the four months spent in Tsunagi-machi, where he was able to escape the huge vortex of the Tokyo metropolitan area and allow his artistic practice to undergo a reset, seems to have been when he truly became aware of what could be described as the subject of his work—a neutral state in which something is about to turn into something new. Something like resolve on the part of Tomita, facing the canvas purely as an artist, can be gleaned from the works exhibited at his solo exhibition at Tsunagi Art Museum, works that were painted in Tsunagi-machi on the coast surrounded by fields and mountains.

This exhibition also presents several landscape paintings similarly rendered with meticulous care using thick slabs of oil paint. The scenes depicted in these works constitute iconic images that all people living in Tokyo share and remember as members of the same community—Ikebukuro, Roppongi, Meijijingu Gaien, Akihabara, Shibuya, Kabukicho in Shinjuku, and Nakameguro. Tomita’s paintings are depicted on the canvas in a way that resonates with the community. Regardless of the individual memories and thoughts each person has regarding each location, he presents the locations as neutral scenes in which personal sentiments have been removed. However, when people take another, careful look at these paintings, they surely look for themselves within them. Tomita, who up until now had never depicted people in landscape paintings, does render the hint of bustling crowds in some of the works in this show. That is the true image of the real Tokyo, and of ourselves in this modern life.

Naoki Tomita
Born in Ibaraki prefecture, Japan in 1983, Tomita graduated in Fine and Applied Arts from the Kyoto University of Art & Design in 2012, then completed a master’s degree in oil painting at Tokyo University of the Arts in 2015.
Recent solo exhibitions include “Ripples” Tsunagi Art Museum, Kumamoto, Japan (2018), “Project N 60 NAOKI TOMITA” Tokyo Operacity Art Gallery, Corridor (2015). He was received the Founder’s Award in the CAF Art Awards from the Contemporary Art Foundation in 2015.